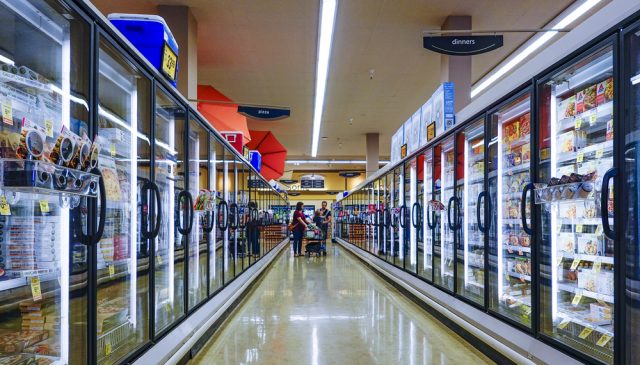 Sometimes frozen dinners are your best option for a weekday meal, especially for busy people. These days you can find a wide range of healthy and tasty microwave meals in the freezer section. But what if you don’t have a microwave, or for some reason don’t want to use one? Can you cook frozen dinners in a convection oven? We have great news for you – not all microwave dinners require an actual microwave!

You can cook most frozen dinners in a convection oven. Convection cooking circulates hot air around the food to speed up browning and crisping. Make sure that the meals you’re cooking in are already mostly cooked through, e.g. lasagna or pot pies, and remember to rotate them halfway through cooking.

The following guide will outline which types of meals are appropriate for this cooking process and how to prepare them properly.

Sometimes there are days when only a frozen dinner will do. Almost everyone enjoys the simplicity and convenience of the frozen meal. And a stroll down the supermarket aisles will tell you that the options are practically endless, from comfort food to vegetarian, organic to super healthy.

Of course, there are the typical frozen dinners such as pizzas, pasta, pies, sausage rolls, fries, etc. There is no denying that these are quick and tasty, and they are certainly acceptable for once in a while. But if frozen dinners are a regular in your home, these are definitely not the most healthy choice.

Your challenge is to find frozen dinners that are satisfying and healthy and can be cooked in a convection oven. Because that is, after all, the theme of this article.

How To Choose A Healthy Frozen Meal

Aside from the convenience of packaged meals, the great thing is that you can check the nutritional information on the packaging before you buy anything. So, if healthy dinners are your priority, then here are a few tips for your next shopping trip:

So now that you know how to choose a healthy frozen meal let’s look at how to cook them in your convection oven.

How Convection Ovens Differ From Other Kinds Of Ovens

From the small standalone countertop ovens to combination wall ovens that incorporate conventional, convection, and even microwave cooking, convection ovens have become very popular in home kitchens in recent years.

Convection ovens work by circulating hot air, using fans and an exhaust system, around the food. These blow and pull hot air through the oven, around your food. As a result, your food cooks at a steady temperature, and the exhaust system removes moisture from the oven. The result is that your food will be crispier, browner, cooked more evenly, and in less time.

You may, however, need to adjust the temperature, cooking time, and pans you use when doing convection cooking.

If you have a combination unit, “convection” will be a setting on your oven, and a switch or a button usually controls it. This allows you to choose whether you are cooking or baking with convection heat or conventional heat.

Can You Cook Frozen Dinners Designed For The Microwave In A Convection Oven?

You should be able to successfully cook frozen foods intended for the microwave oven (e.g. frozen lasagna) in the convection oven. Ensure that you remove any plastic packaging that would melt in an oven. Then, once you have placed the meal in an oven-appropriate container, cover with foil, and off you go.

You will want to cover with foil because, as we have already mentioned, the convection oven tends to crisp and brown food. However, food intended for microwave cooking is probably not going to need any crisping or browning.

How To Cook Frozen Dinners In A Convection Oven

Convection ovens work well for cooking many frozen meals. The techniques you use to cook frozen food in a conventional oven are similar to a convection oven. You might need to experiment with temperatures and timing initially as you get to know your convection oven.

Let’s go through the process step by step:

If, however, you are cooking a few things on multiple racks, don’t adjust the temperature – a crowded oven will need extra heat.

If your frozen meal does not contain any oven instructions, you will need to experiment a bit. A good starting point is to assume that it should be cooked at 350 degrees for 30 minutes.

Place the frozen food on low-sided or rimless cookie sheets or baking pans. Light-colored aluminum is also great as it stops the food from browning too quickly. In addition, the low sides allow for good air circulation, which will help the food crisp up. You can buy special pans for convection ovens, but regular pans work just as well.

Obviously, this doesn’t apply to foods like casseroles and cakes. These sorts of foods need the high sides of their pans to hold their shape and where crispiness isn’t the goal.

The actual time in the oven will need to be reduced by a few minutes as convection cooking is quicker than conventional cooking, especially if you only have one item in the oven. Drop the time by 5-10 minutes at first to get a feel for how quickly your oven cooks frozen meals.

Place the roasting pan or cookie sheet with the long side parallel to the oven door and try to avoid opening the door frequently. However, check it often to prevent overcooking, particularly towards the end of the cooking period. Rather than relying on the timer, judge whether your food is done by how it looks and smells. According to USDA, all prepared frozen meals should be cooked to an internal temperature of 165 degrees.

The more familiar you get with your convection oven, the better you will get at judging the cooking time.

Convection cooking is not recommended for cooking cakes, quick bread, custards, or soufflés – the air movement created by the fan and exhaust system might cause these foods to cook unevenly or not rise as well as they could. Delicate foods like custards could also form a crust that shouldn’t be there because the oven wicks away the moisture.

Advantages Of Cooking Frozen Dinners In A Convection Oven (vs. A Conventional Oven)

The convection oven is a winner for a few reasons:

Food Cooks Faster Than In A Conventional Oven

With hot air blowing onto your food instead of surrounding it, food cooks much faster in a convection oven. As a result, you can probably cut out around a quarter of the cooking time.  (But if you are comparing cooking times to a microwave oven, the microwave wins.)

Regular ovens tend to have hot spots, depending on the placement of the heating element. The fan in a convection oven circulates the air, which evens out any variations in temperature.

In a conventional oven, the air can become a bit humid. The humidity occurs because moisture can’t escape. Convection creates a dry atmosphere inside the oven that helps foods like meats and vegetables get browner but keeps the inside of the food moist.

The food cooks faster and at a lower temperature, making it more energy-efficient than a regular oven.

When Should Frozen Food Be Thawed Before Cooking?

Many countertop convection ovens claim to cook frozen foods. But generally speaking, for the evenest cooking, it is a good idea to thaw food before cooking. Cooking food from frozen, especially meat, is not a good idea. Food cooks from the outside in, which means that you may end up with a meal that is overcooked on the outside and not cooked, possibly even frozen in the middle.

This, however, doesn’t apply to frozen prepared foods that are created to be cooked directly from frozen. Frozen foods, such as pizza or packaged convenience meals, can be cooked in a convection oven without pre-thawing the food. Always check the packaging for cooking instructions. They will usually tell you whether the food can be cooked from frozen.

Sometimes you can use the oven to thaw or defrost food quickly. For foods that will likely thaw in under two hours, place them in a roasting pan and set the pan in the lower part of the oven at 135 degrees Fahrenheit. Check the food often to make sure it is not cooking.

Don’t do this with large items, as this is a potential food safety risk. If it will require longer than two hours to defrost, you should select a different method of defrosting to avoid foodborne illnesses.

Potential Safety Hazards And Other Warnings

Always use an appropriate food container or protective pan if the food goes directly onto the rack. Drips, spills, or leakage can present fire hazards, especially greasy or sugary food. At best, when they fall to the bottom of the oven, the drips and spills will burn and smoke and possibly affect the flavor of your food. Worst case scenario, they could get onto the element or touch the gas flame and ignite.

No matter what temperature you’re cooking at, you cannot put plastic, even super durable plastic, in an oven. Even if the plastic doesn’t melt, it can leech harmful chemicals into your oven.

Frozen meals often come in a commercial grade, specially designed plastic container, and while you can put these containers in the oven to cook the pre-prepared meal, they should never be reused because they degrade while being heated. Don’t be confused by silicone cookware, though – this is not the same as plastic and is designed for oven use.

Empty glass, cold glass, damaged glass, and non-tempered glass can suffer thermal shock when subjected to the oven’s heat. This is when the glass shatters due to sudden changes in temperature.

Be sure only to use glassware that is designed for oven use. Ensure that it is full of food and at room temperature before putting it in the oven. Avoid moving food straight from the fridge into a hot oven. If the glassware is chipped or cracked, avoid using it in the oven, as these can also make it vulnerable to breakage in the oven.

When your food is cooking, don’t cover it with anything not intended for the oven – e.g. wax paper will melt and ruin the food. Likewise, paper towels, plates, and bowls will burn in a hot oven. The only paper you can safely use in an oven is parchment paper.

Wet or damp towels, potholders, and oven mitts are also dangerous. Any moisture in these items will instantly turn to steam and burn you while taking this out of the oven. Only use oven mitts or potholders that are completely dry to handle your food.

Convection ovens are a great way to cook most frozen meals. The speed of convection cooking adds to the convenience that comes with cooking pre-prepared frozen dinners.

Many frozen meals can be cooked in a convection oven, as long as you remember to make the necessary adjustments to cooking time and temperature, and packaging.