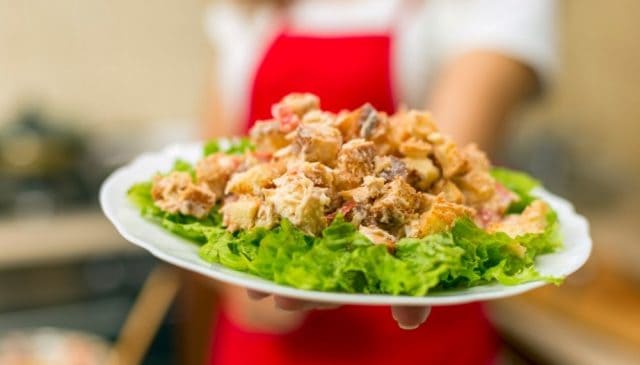 If someone is running late for dinner, you may wonder what’s the best way to keep their meal warm. For instance, can you put a plate in the oven?

Well, it depends. Not all plates are oven-safe. Normally there is a label on the plate telling you whether the plate is oven safe. However, what if that label can’t be seen, and you still aren’t sure.

In this article, we will be going into detail about what kinds of plates you can and cannot put in the oven.

Can You Put A Plate In The Oven? Yes, If It’s One Of These

Typically, oven-safe plates will have a label on them that tells you that they are oven-safe. However, the following materials are considered to be oven-safe for your plates.

Glass is one of the most popular and commonly used materials that your plates will be made from. Pyrex and Corelle are both made from particular types of glass.

Corelle is a very oven-safe type of plate. It is also one of the most common types of plates that you will find.

This is a very oven-safe plate that can withstand 350 degrees Fahrenheit. However, it’s usually not necessary to put your plate into an oven that hot.

To keep your food warm or to just reheat it, you only need your oven to be around 250 degrees Fahrenheit maximum.

Pyrex can withstand higher temperatures – generally up to 450 degrees. However, even though it’s made to take hot temperatures, you still have to be wary of thermal shock.

Just like with glass, ceramic is another popular material choice for plates. Compared with other plates, a ceramic plate is quite heavy, but it can withstand the temperatures of the oven easily.

Ceramic plates are normally made, by placing the plate in a kiln at a very high temperature.

However, a note of caution with a ceramic plate that has been decorated after it has been fired. Putting the decorated plate in the oven could cause the paint to fall and chip off.

Like with all plates, but especially with ceramic plates, you need to be wary about thermal shock. However, generally ceramic plates do very well by being put in the oven.

Not many people have metal plates, and it isn’t a very common material to be used. However, metal is one of the best materials to be used in the oven, that won’t be affected by the heat.

Stainless steel or enameled stainless steel plates aren’t impacted by thermal shock. Although, if the plate is very thin, then the plate could possibly wrap when exposed to very high temperatures.

A cast-iron plate is a little unusual, but it can withstand the oven. You will have no worries about putting a cast iron plate in the oven.

It is quite heavy and retains its heat for a little longer, but you don’t have to worry about wrapping or cracking with this kind of plate. However, they are rare.

Can You Put A Plate In The Oven? Not If It’s One Of These!

Not all plates are oven-safe. The materials that we are going through might seem like common sense, but some people have tried to put these materials in their ovens.

This may seem extremely obvious, but it may be surprising to know how many people have tried or accidentally put a plastic plate in the oven. When any plastic is exposed to high temperatures, this causes the plastic to melt.

Yet there are some plastics that can withstand high temperatures, they aren’t that common. Also, your plate wouldn’t be made out of that material.

As a result, you should avoid putting any plastic plate in your oven at all costs. Not only will it melt, but it will also give off toxic fumes.

Again, this may seem like common sense, but we want to cover all bases. Do not put paper in the oven. Paper is very flammable and will catch on fire at low temperatures.

Therefore, never put any paper products in the oven, especially paper plates. The last thing you want is for a fire to begin in your oven from a paper plate.

If you put a wood plate in the oven, it will catch on fire and burn. There are some wooden plates that have been treated or coated in enamel, but we would still be cautious about putting wood in an oven.

You don’t want to start a fire in your kitchen when all you want to do is keep your food warm or reheat your leftovers.

Styrofoam is very cheap to make and is good at keeping things cold. However, it will melt very easily at high temperatures.

Also, just like plastic, it will give off very toxic fumes when it melts, which is harmful to you. As a result, you should never put any styrofoam in your oven.

Why Do Plates Break In The Oven?

Thermal shock happens when the plate goes through a rapid change in temperature. As a result, if a plate rapidly changes in heat, whether that is heating up or cooling down, this can cause the plate to break.

Even plates that are labeled oven safe are known to suffer from thermal shock if they are heated too quickly or cooled down too quickly.

To avoid thermal shock, you shouldn’t put a cold plate into a boiling hot oven. You should put the plate into a cold or warm oven to let it heat up as the oven is reaching temperature.

Alongside this, once you have taken your plate out of the oven, you shouldn’t put it in the fridge or into cold water straight away.

There are some plates that you can put in your oven. It all depends on the material that your plate is made from.

The easiest way to know if your plate is oven safe or not is to check if it has a sticker or label that says oven safe or not. However, any plate is subject to thermal shock if it is forced to change temperature too quickly.