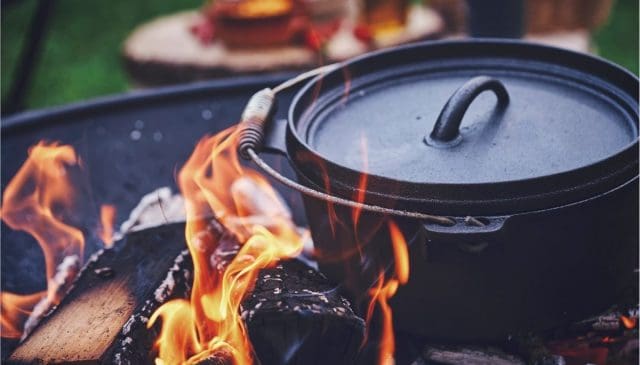 In kitchens across the world, the Dutch oven is one of the more distinct cooking pots you’ll find. Traditionally made from ceramic and coming with a lid that seals its contents inside, it’s an ideal dish for a casserole, stews, and other recipes that need deep, consistent heat without braising.

But, if you seldom make the types of meals that call for a dutch oven, you probably don’t have among your essential pots and pans. No worries! If you’re wondering what can I use instead of a dutch oven, we’ve got the answers below!

Keep reading to find the alternatives that you can use instead of a Dutch oven to get the same (or similar) results. We have covered how Dutch ovens work, substitutes for Dutch ovens, and the best Dutch oven substitute.

Maybe you’re totally new to Dutch ovens. In that case, you should understand how they work so you can find the best substitute for them. By getting pots that are built or operated similarly to a Dutch oven, you’ll get better results when you cook with them.

Dutch ovens are surprisingly versatile in how you can cook with them. They are typically made from ceramic or cast iron and, as a result, they retain heat easily and spread it evenly across the contents of the pot. If a Dutch oven has an enamel cast iron surface, then it should be kept away from open flames, otherwise, it can be used with any heat source.

This consistent heating action can be used to slow-cook, stew, roast, fry, bake, or sauté recipes, just to name the most common uses. While they can be used without the lid, it’s the lid that is instrumental to cooking certain foods. The lid keeps moisture inside the Dutch oven and some are even designed to catch condensation and redirect it into the food, basting your meal automatically.

The most common use of Dutch ovens is slow cooking, where it can more evenly cook the food inside while locking in moisture, braising, and tenderizing any meat that is placed inside. Before we had slow cookers and other dedicated appliances, it’s the Dutch oven that would have been used to cook meals over a long period.

What Can I Use Instead of a Dutch Oven? Your Best Option

With the above information in mind, you may have guessed that it’s the slow cooker that is the best alternative to a Dutch oven. They use all of the same principles for cooking your meals and, as we said, we used Dutch ovens for slow cooking before we invented electronic slow cookers. Dutch ovens are practically slow cooker pots that we place in the oven or over another heat source. With Dutch ovens and slow cookers, you just need to place the ingredients inside, arrange them if needed, season, add liquid, and cook.

In many ways, electric slow cookers are more convenient than a Dutch oven. They have variable settings, so you can cook with high or low heat depending on the recipes you’re working with. You can go from sauteing to slow-cooking, all in one pot.

Slow cookers aren’t the only thing that can be used instead of a Dutch oven. Several tools can get the job done, so let’s cover them here. Maybe you already own a slow cooker or you just wanted something else, in which case investigate these options.

Casserole dishes are very similar to Dutch ovens, providing that the dish is deep enough and the lid fits well enough to keep moisture inside. These are often made from ceramic with enamel finishing, meaning they can’t be placed directly onto many heat sources.

That also means you won’t be able to sauté or sear things inside the casserole dish, so that would need to be done before placing them in it.

Clay pots are also very similar to Dutch ovens and casserole dishes. Clay pots are best when you want to get the self-basting action of a Dutch oven without actually using one. Clay pots typically have cone-shaped lids, so the moisture rises, gets captured, and then falls back down onto the food in the pot.

Where clay pots were once made ‘naked’ where they didn’t have an enamel layer, many modern pots do and this means they can’t be exposed to open flames.

Stockpots are very common, so you probably have at least one in your kitchen already. They are deep metal pots with a thick bottom and a tight lid, perfect for searing, sauteing, and slow-cooking like you would with a Dutch oven.

This is typically at low heats, between 250 and 275 degrees Fahrenheit. It’s best to use stockpots over low heat, otherwise, you risk ingredients sticking to the metal walls of the pot. You may need to refill any liquid as they boil, too.

Assuming you have a lid to place on them, frying pans can be used to substitute searing and sauteing as a Dutch oven would. It can be tough to find a lid that properly fits over a pan if it didn’t come with one. But, you could try a saute pan instead.

The same applies to skillets too, which are deeper and can store more food. When placed in the oven, you can roast using a skillet, though slow-cooking wouldn’t be possible.

Now we’ve covered what a Dutch oven does and the five most popular alternatives, you should be ready to decide on what replacement you want to get.

If you don’t have a Dutch oven, you can get the same results with a slow cooker, a casserole dish or clay pot, a stockpot, or a frying pan (ish). Some of these, like the frying pan, should be in your kitchen already if you own the essentials.

Remember that a slow cooker can do everything a Dutch oven can while the others may require some compromise on your part.