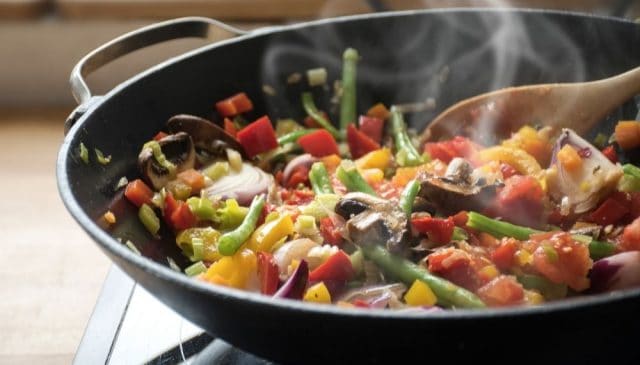 This post provides all the basics that you might want to know about woks. We’ll answer basic questions like: What does wok mean? Is a wok really necessary? Is a wok worth it? And many more!

What Exactly Is A Wok?

A wok is a type of handheld pan used for cooking, and it is known for being one of the most popular pans to use in China. It originated in China, and it has been used for centuries.

It has a deep rounded bottom, and this allows food to be heated to a higher temperature than normal pans, and it is more direct heat.

Woks can be made of a variety of materials, but the most popular type is carbon steel. Carbon steel is durable, heats evenly, and has a nonstick surface. It’s also inexpensive compared to other materials.

Historical Uses Of The Wok

The wok has been around for thousands of years, and most likely first originated around 2000 years ago, during the Han dynasty.

The earliest models of woks in the Han dynasty were made of cast iron metal, and they were extremely strong and durable. The wok was interestingly first used to dry grains, and it later became popular for stir-frying meat and vegetables.

The woks found in the Han dynasty tombs were somewhat smaller than they are today.

What Does Wok Mean?

The word “wok” is simply a derivative of the Cantonese word that means ‘cooking pot.’ This is simply, what a wok is, and it is still a staple part of Cantonese culture.

What Is The Difference Between A Wok And A Frying Pan?

There is certainly a big difference in appearance between a wok and a frying pan, and they are typically used for different purposes. Yet, they can be used interchangeably. A wok is a deep-bottomed frying pan that reaches very high continuous temperatures.

When using a wok, it is designed to be stirred continuously, ensuring all the food inside is at a consistent temperature. A frying pan is shallow in comparison and does not have the bowl-like look that a wok does.

But, a frying pan has a larger flat surface area, and it is perfect for cooking things in a gentle manner, such as meat and sauces that may need a steady cooking process.

Is A Wok Really Necessary?

Using a wok is not always necessary, especially if you have survived in the kitchen until now without ever using one. It would be better to use a wok for stir-frying if you have one, but it is not completely necessary to use a wok.

However, woks are versatile and can be used for a wide range of dishes.

Woks are meant to be used for combining lots of ingredients together at a high heat, which is why they are perfect for stir-frying.

How Hot Can A Wok Get?

A wok can get seriously hot. Which is one of the reasons why they are so good for stir fry. The wok has a dome-shaped bottom, which is smaller in surface area.

It is closer to the heat source, and it gets really hot because of this. Woks also tend to be made out of a slightly thinner material, like carbon steel.

A wok can reach temperatures of over 750F if it is set over a conventional gas burner.

Is It Healthier To Cook In A Wok?

In some ways, it is healthier to use a wok in comparison to a frying pan. A wok reaches extreme temperatures, meaning you do not need as much cooking oil, as the pan retains a lot of heat.

Also, you can use the sides of the wok to push the food upwards when serving, meaning the wok will naturally drain any oil or grease into the bottom.

So, stir-frying in a wok is definitely healthier than other kinds of frying because the wok will stay hotter for longer and cook your food more quickly. That means you will need very little oil, which also makes clean-up easier!

Is It Worth Buying A Wok?

It is certainly worth buying a wok. They are typically less expensive than normal frying pans, and they can reach high temperatures.

They are especially good if you tend to cook lots of Asian dishes, but you can also use them for regular cooking, deep-frying, and boiling.

Can I Use A Wok For Frying?

You can undoubtedly use a wok for frying due to the high temperatures it can reach.

You may want to be more cautious when frying with a wok, because they get a lot hotter, and will cook foods quicker. It is also wise not to fill the entire wok with oil, as this may cause harm.

How To Season A Wok

Before you use your wok, you should season it. That will allow the pan to form a protective layer that makes it easier to clean, supplies non-stick properties, and keeps it strong.

This is the simple way to season a wok:

You can alternatively season your wok using oil, and this is a more popular option. To season your wok with oil, carefully rub a thin layer of vegetable oil around the wok, covering all the pan.

Heat the wok on high heat, just before it hits smoking point. When the wok has sufficiently cooled, give it a final rub of oil with some paper towels. Your wok is now ready to use.

Note that you can also use a wok on an electric stove, but a gas stove is preferred.

How To Clean A Wok

Cleaning a wok is simple. After using your wok, wash it under very hot water and lightly brushing away any food particles. You should avoid using soap or scrubbers because that will remove your seasoning patina.

Do not put your wok in the dishwasher unless you have no other option, as this may ruin the surface and capacity of your wok.

You want to make sure that your Wok is completely dry before storing it away. Otherwise, you risk having your wok rust. So, heat it over low heat for a bit before putting it away.

Woks are excellent “cooking pots”! They are exceptional for reaching high temperatures, as well as combining noodles with vegetables and meat. They are also suitable for deep-frying, because they retain heat.