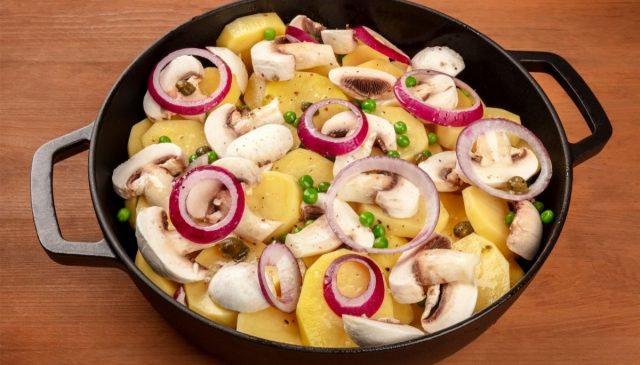 Cookware can be so complex when it comes to the names of different types of cooking tools. Chances are that you’ve heard of a Dutch oven, a skillet, and a stockpot, but what about a braiser? Even if you’ve never heard of this term when referring to cookware, there’s a good chance that you have actually seen one of these in the kitchen before.

So, What Is A Braiser?

A braiser appears very similar to a Dutch oven in the fact that they are both cast iron cookware that has been coated in enamel. However, a braiser has much shallower sides than a Dutch oven. Braisers are typically used to braise meat, as the name suggests. You will likely use your braiser to sear your meat, or even use it to simmer liquids.

Braisers typically have a large surface area so that you can use this to brown your meat. This surface will give you an even heat distribution so that you get more reliable results, too. The lid of a braiser dish is also tight fitting so that the ingredients won’t spill out or boil over if you simmer these in the oven.

As the sides of the braiser dish are much smaller than other casserole dishes, these usually aren’t best suited for trying to cook whole chickens, meat joints, or large quantities of soup or other similar dishes. You will get the best results out of your braiser if you use this to either brown your meat or allow your dishes to simmer over medium to low heat.

What’s The Difference Between A Dutch Oven And A Braiser?

That isn’t to say that a braiser isn’t as useful as a Dutch oven, though. Its smaller size makes it easier to move around, and easier to slot inside your oven alongside other dishes. It will also be much easier to use a braiser to brown your meat than hefting your Dutch oven out onto the stovetop.

What’s A Braiser Used For?

A brasier tends to be used for browning meat and allowing other liquid dishes to simmer. This will be intensely helpful if you are a keen cook, as it will give you a piece of cookware dedicated to this purpose. You can easily sear your meat in your braiser, and use it to allow the meat to marinate in your favorite marinade.

Its smaller size also makes the braiser easier to move around when you need to. Even though it’s traditionally made using cast iron, this will be much easier to maneuver than a Dutch oven for example.

Most folks don’t have space for lots of pots and pans that only have one use. So, you may be debating whether a braiser is really one of the pots and pans that you need. But a braiser pan is not limited to braising. It has many versatile applications in the kitchen, including charring vegetables, making skillet fry recipes, and roasting a whole chicken (if it’s not too big). Plus, for those families who like the convenience of one-pot cooking, a braiser is an excellent choice!

What Is The Difference Between A Casserole Dish And A Braiser?

As with the differences between a braiser and a Dutch oven, it all comes down to the height of the dish’s sides. A braiser has naturally shorter sides so as to make it easier to maneuver. This also makes it easier to brown your meat, as you’re not having to accommodate for the steep sides of the pan.

So ultimately, if you need a dish to help you brown your meat and allow a smaller dish to simmer, a braiser is an excellent choice for the job.

Can A Braiser Be Used As A Skillet?

The good news is that yes, a braiser can be used as a skillet! This is a wonderfully versatile dish that can be used for a wide variety of purposes. The great heating properties of cast iron lend themselves well to use as a skillet. So, if you don’t have a skillet to hand, you can easily use your braiser instead.

What Size Braiser Should I Get?

Ultimately the ideal size of your braiser will depend on how many people you are cooking for. If you have a family of 4, then you should opt for a braiser with a 4-quart capacity. This will give you more than enough capacity for the dishes you want to cook.

If you have a larger family of between 6 to 8 people, then you will need to look for a larger braiser. A braiser with a 5-quart capacity will be perfect for your needs.

So, when it comes to choosing the best-sized braiser for your needs, you will need to think about how many people you need to accommodate. If you have a smaller family of around 2 to 3 people, you could even opt for a smaller 3.5-quart braiser.

So, there’s your answer if you’re wondering what is a braiser. A braiser may appear similar to a Dutch oven and other types of cookware, but this is actually a slightly shallower dish that has been designed with very specific purposes in mind. This cookware is used to brown your meat, as well as allow dishes to simmer.

Braisers tend to be made using cast iron, as this material heats well, and can maintain an even temperature. The dishes are often coated in enamel to give them a non-stick quality which is essential for the above applications.

So why not treat yourself to a new braiser and use it to sear your favorite cut of steak?