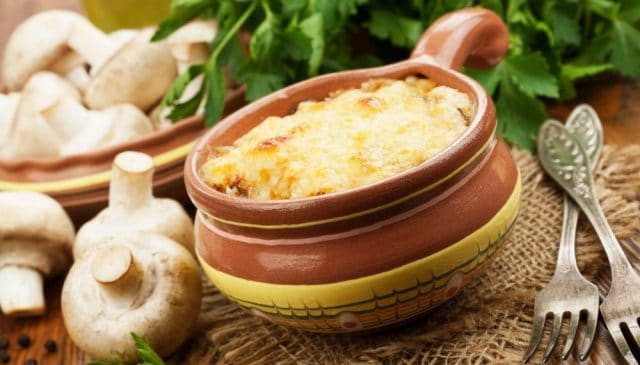 Keen home cooks may have heard the term cocotte thrown around in reference to must-have french cookware.

However, if you’re new to cooking, and just building your cookware set, you might not be entirely sure what one is and may be asking yourself “what is a cocotte and why do I need one?” Today we’re going to answer just that and cover everything you need to know about how you can use a cocotte in your own kitchen.

So, What Is A Cocotte?

Simply put, “cocotte” is the French term for a Dutch oven or a French oven. A cocotte is an enameled cast-iron casserole dish that comes in many different sizes and shapes. It has two handles on either side to make it easier to handle as cocotte are quite heavy.

They also tend to come with a lid so that you can cover your dishes as needed during the cooking process.

Cocottes were originally created in the Netherlands and were made of cast iron. In its raw form, cast iron made versatile cookware, and could often be used to cook a variety of dishes.

However, typically these days, cast iron is often coated in enamel to give it a non-stick coating that makes it even easier to use for cooking. You may be familiar with the popular brand Le Creuset.

The French often refer to cooking “en cocotte” which refers to a style of cooking in a tightly covered pan in an oven. For instance, the recipe eggs “en cocotte” (oeufs en cocotte) involves baking eggs in the oven in a cocotte. It’s hardly a surprise that Dutch ovens may be referred to as a cocotte around Europe, as these cast iron casseroles are used to cook many popular French dishes from cassoulet (white beans baked with pork) to beef bourguignon.

What’s really great about this dish is how versatile it is. You can use it to roast chicken, bake casseroles, make stews, and a whole bunch of other tasty recipes, too.

What Is The Difference Between A Dutch Oven And A Cocotte?

So what is the difference between a Dutch oven and a cocotte? As we now know, these are actually two different terms for the same piece of cookware.

Some may argue that the difference is in the coating. That the Dutch oven that originated in the Netherlands is made of uncoated cast iron, whereas the cocotte or French oven is coated in enamel. But by today’s standards, all three terms – Cocotte, Dutch Oven, and French Oven – all refer to the same thing – a round or oval enameled, cast iron pot with a tight-fitting lid.

You may have heard someone French describe a cocotte as a casserole when describing it in English, but by “casserole” the French mean this type of pot, not a recipe/dish as it might in The United States. The French refer to baked dishes, or casseroles to Americans, as “cassoulet”.

Aside from the different terms, there is very little to no difference between a Dutch oven and a cocotte.

What Is The Difference Between A Cocotte And A French Oven?

Similar to the term Dutch oven, the French oven is simply another name for a cocotte. It is, of course, a versatile piece of cast iron cookware that is typically coated in enamel to make cooking even easier.

While the French will often refer to a Dutch oven as a cocotte, other Europeans may call it a French oven.

Is A Cocotte The Same As A Ramekin?

You may have seen small cocottes – both Le Creuset and Staub make mini versions, but they are not the same as ramekins. While both are great for serving individual portions, ramekins tend to be made of porcelain, and of course, mini cocottes have lids and retain heat while baking.

Why Is A Cocotte Great To Cook With?

Remember how we said a cocotte is made of cast iron? And that it has two handles because it’s so heavy? You might be thinking “Right, so why do i want to do all that heavy lifting?!” It’s those materials that make this such a versatile piece of cookware!

First, this pot is well insulated, which means that it retains heat, and distributes that heat, evenly. This makes it perfect for cooking things low and slow, like braising meats. Think of cocotte as the original slow cooker. In fact, pretty much anything you would cook in your slow cooker, you can cook in a cocotte in your oven on low.

Second, a cocotte can go on your stovetop and in your oven. This means you can sear your pot roast and then pop it in the oven without dirtying a second pan. It’s also perfect for soups, not only because it will keep your stock at an even simmer, but also because it’s big! Cocettes can hold a lot of food.

What Is A Cocotte Used To Cook?

You can make all manner of dishes with a cocotte. It is a versatile piece of cookware that you can use to create a wide variety of recipes. You can use your cocotte to prepare stews, broths, soups, pasta dishes, and many more.

You can even bake bread in your cocotte! The thick walls and lid trap steam inside giving your loaf the perfect crust.

One of the best ways to use your cocotte is to prepare a tender piece of meat – the most common choices are chicken, beef, or lamb. You may want to sear (brown) your meat in the cocotte on the stovetop first. Then simply place the meat into your cocotte and surround it with your favorite diced vegetables.

Add a dash of salt and pepper as well as a couple of herbs (we personally love adding lemon to the chicken cavity), then allow your ingredients to cook in the oven on low heat. This method of cooking “en cocotte” should help to make the meat lovely and tender.

So there you have it! Today, a cocotte is essentially the same thing as a Dutch oven or a French oven. All three can be used interchangeably.