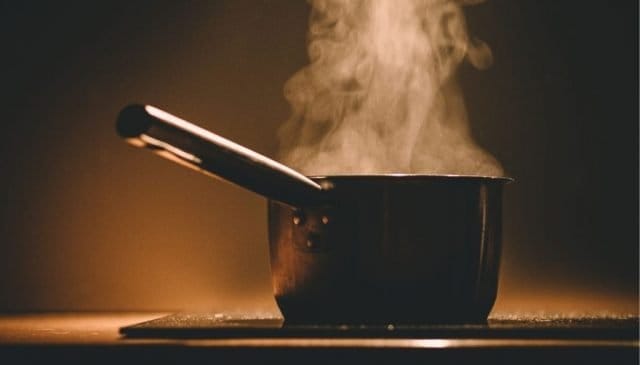 When outfitting your kitchen, you want to have the best tools for the job, and that usually starts with pots and pans. There’s nothing worse than finding a recipe, preparing your ingredients, and then realizing that you don’t have the right pot or pan to see it through.

To avoid those mishaps, you should have all the necessary pots and pans to cook anything you want in your kitchen. But what is the difference between a pot and a pan anyway?

We’re giving you the rundown on pots, pans, and the difference between them. By learning about the different types of pots and pans available to you, as well as their specific uses, you’ll know which to purchase for your kitchen and which recipes you can tackle with each for the best results.

The Difference Between a Pot And A Pan

To start, let’s cover the main differences between a pot and a pan. First, you should know that there’s no one pot or pan. Each is its own category of cookware that encompasses an array of different shapes and sizes, so comparing them broadly is not an exact science.

With that said, there are a few generalities that distinguish a pot from a pan.

Pots tend to have tall, straight sides, while pans are shallower and their sides might be straight, slightly curved, or rounded.

Pots, due to the fact that they’re taller and possibly heavier, have two looped handles, one on either side, so that the pot can be moved safely and steadily. Pans, on the other hand, have one long handle to easily maneuver the pan during cooking.

Just as pots and pans are shaped differently, they are also used to cook differently. The high, straight sides of pots make them perfect for holding large volumes of liquids and allow them to heat food evenly. This means they are great for simmering and boiling, as liquids don’t evaporate quickly. Pots often come with lids that also help stop moisture from escaping. Foods in a pot typically take longer to cook than in a pan.

Pans have shallow sides which means they cook food faster and at higher temperatures. They are ideal for frying, searing, sautéing, reducing, and browning foods. Their long handles make it easier to toss foods and move them around over high heat while keeping your hand away from the flame or element.

Now that we’ve explained the ways that pots and pans differ, let’s check out several specific examples of them so you can see what we’re talking about more clearly.

Saucepans are one of the most common types of pans. They’re often the cause of some confusion too, since they have higher walls than many other pans, making them look like a small pot with a long handle. (There’s a specialty pan also used for making sauces called a saucier.)

They’re very popular because they are versatile, so you can use them to prepare all kinds of ingredients.

The tall walls of a saucepan are for heating its contents from multiple sides. This helps thicken liquids, hence the name, but saucepans don’t have thicker bottoms like most pots.

They can cook much more than just sauce, however, which is why they are so popular. They are great for preparing baked beans, rice, pasta, and vegetables in smaller portions.

In larger portions, you may benefit from getting a pot that can handle more capacity.

In a pinch, the saucepan can be used as a small pot for reducing ingredients or simmering liquids.

In reality, a saucepan is both a pot and a pan, so you shouldn’t worry too much about what it can or can’t do, it can do pretty much anything.

With a wide diameter, a thick bottom, and short walls, the frying pan is probably the most recognizable pan out there. It is clearly made for quick, high-heat cooking over a stove or another heat source, so there’s no real confusion about whether it’s a pot or a pan.

While they can be used to reduce liquids, frying pans are inseparable from the bacon or eggs that are often cooked in them. You can’t cook those in a pot, that’s for sure.

The shorter walls leave a lot of access, so you can maneuver foods around the pan without hitting anything. You can easily get at food to flip or reposition, with tongs or a spatula, which would be harder with a standard pot.

Where pots are typically better for slow cooking, you can fill a frying pan with ingredients for a quick meal that can be ready much faster. Like a saucepan, frying pans are very versatile.

Sauce pots look like saucepans, though they are deeper, have a wider base, and have looped handles instead of a singular, protruding one.

It’s designed for some of the same things as a saucepan, like reducing liquids into sauces, though they hold a higher volume that slows evaporation.

If you’re making larger batches of a meal that needs to stay wet, a sauce pot is much better than a saucepan. They can be used to prepare sauces or entire meals, like stews, that include solids, such as some form of meat and vegetables, as well as a sauce component.

With a saucepan, you’ll need to whisk its contents often to stop them from burning, but the deeper saucepot, which cooks at a lower and steadier rate, does not require the same level of attention.

Stockpots are usually the largest pots in the kitchen; they have the highest walls and are specifically made for heating a lot of liquid without losing it to evaporation.

That makes them very similar to sauce pots, and perfect for meals that require moisture, like soups and stocks. They’re also the go-to when you need to fill your entire family with pasta at dinnertime.

While they are taller, they tend to have smaller diameter bases than some sauce pots. They are great for big jobs that require simmering, boiling, or steaming ingredients that need to maintain moisture for taste and texture reasons.

While some reduction takes place in sauce pots, you don’t get this with stockpots, making them the best pot for boiling liquids and having some left afterward.

You should now appreciate the difference between pots and pans.

Having covered two of the most popular types of each, it’s clear that pots are taller, designed for two-handed carrying, and are better at cooking food without losing moisture.

Pans, on the other hand, are shorter, have one handle, and feature more evaporation that helps reduce any liquids inside of them. Pans are often used for shorter cooking tasks while pots are for longer, and larger, meal preparation.

Knowing these differences, you can get a healthy balance of both and make sure you’re ready for whatever recipe you attempt.