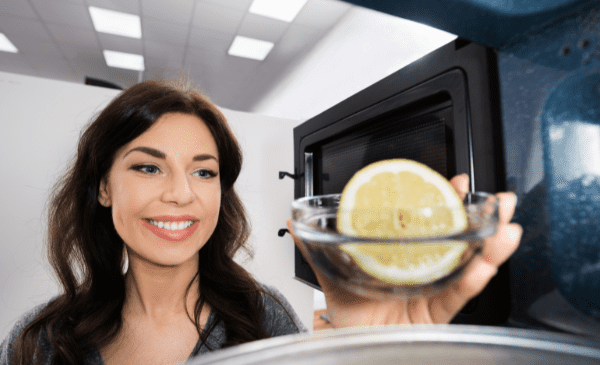 Microwaves were made to help us in our everyday lives – from warming leftovers and reheating coffee, to cooking simple meals – microwaves are one of the most convenient appliances in today’s kitchen.

With so much going on in our everyday lives, we need food, and we need it fast! And microwaves are the perfect way to get a meal on the table quickly.

Most of us have probably spent many lifetime hours hungrily watching that turntable spin as the timer counts down. Have you ever wondered why do microwaves spin anyway? Is it actually necessary? Keep reading to learn this and more.

So, Why Do Microwaves Spin Today?

It may surprise you to learn that microwave ovens actually didn’t always spin, which might be an alien concept nowadays.

Because they didn’t spin, old microwave ovens would cook food with both cold and hot spots, or even ice, depending if the food was frozen.

Even with newer microwaves, it is always recommended that you stir whatever it is you’re making half way through the timer. If you can’t stir the item, consider flipping it.

This, combined with your spinning turntable, should ensure more even cooking.

How Did Older Microwaves Work?

If you’ve used (or own) a classic microwave oven, the first obvious thing you’ll notice is the lack of a spinning turntable. It was quite simple, you put whatever you wanted to be heated up in the middle of the microwave, and pressed the timer. Easy!

The main problem with this version of the microwave was the uneven cooking. You’d have an extremely hot and cooked outer edge of your item, but the middle was tepid at best.

The easiest explanation as to why this happened is because the lack of a spinning turntable meant the heat generated by the microwaves could not distribute evenly, causing a half-cooked mess.

Basically, microwaves move like a beam of light, so if your food remains in one place – the beam will only pass through the same spots.

So, if you’re among new affordable microwaves – getting one that has a spinning turntable is essential unless you’re hoping for partially cooked foods and beverages.

Allowing the food to continue cooking all around evenly (and ensuring you’re stirring and flipping) is the best way to avoid cold areas and potentially dangerous eating!

Does A Turntable Guarantee That My Microwave Will Cook Evenly?

Nothing is ever truly without fault, at least not yet! When you’re in the market for a brand new microwave oven, you’ll definitely want to be sure that you’re grabbing a spinning turntable microwave. It would be silly not to!

Having said that though, spinning microwave ovens – regardless of how professional they are – will never be perfect. You’ll almost always have to stir things like soups, curry, chili, porridge etc. and you’ll have to flip things like a hot pocket.

The day will come eventually where a microwave oven will be able to evenly cook your meals without effort on your part, but that day has not yet come to fruition – unfortunately for us!

When Did The Microwave Oven Start Spinning?

The first domestically used microwave was first introduced in the United States in 1955, though they were incredibly expensive and only appealed to the affluent. In fact, the original price was $1295 which in modern money is $10,500. Yikes!

The design and function of the microwave came from the Second World War, and its first concept was a complete accident. Technology that the Army used for radar systems was discovered to be able to cook food when a radar systems engineer accidentally melted a candy bar!

Microwaves over the decades became smaller, more affordable, and were eventually mass produced, due to high demand for this helpful kitchen appliance. This period of boom was between the 1970s and the 1980s.

In 1980, the Micro-Go-Round was invented – which was created by a company called Nordic Ware. It took the microwave technology and went in a new direction with it, implementing the first spinning turntable.

The company understood the gap in the market with this technology. The problem was, as we have said, the original non-spinning microwave oven would cook the food unevenly and potentially undercook dangerous items like chicken – even if they looked cooked!

The technology was simple. It was a case of turning the knob that spun the table, until the timer had finished. The inside plate would allow the food to spin on it and they worked for a maximum of an hour.

Of course, you could use it again – assuming your food wasn’t yet done!

So, Do All Modern Microwaves Spin?

Of course, by now you understand that the older models, pre-1980 did not spin and it’s possible to still find these if you look around online or in old electronic stores and pawn shops.

However, there are plenty of modern microwaves that do not spin. They are usually commercial, or industrial, microwave ovens, found in restaurants for example.

You might wonder, after all that we’ve said – why would a restaurant choose to use a microwave oven that doesn’t spin? The answer is simple, and comes down to several of these factors:

Is It Safe To Use A Normal Microwave Without Its Turntable?

It’s perfectly fine for you to use your microwave at home without its turntable, but you’ll have to remember to stir more frequently or cook your food for longer. So if your turntable is in the dish pile, your dish is too large to spin, or you’ve broken it and are awaiting a replacement, you can safely use your microwave without the turntable.

Want to learn more about how the microwave was invented by accident? This article in Popular Mechanics delves further into the topic.