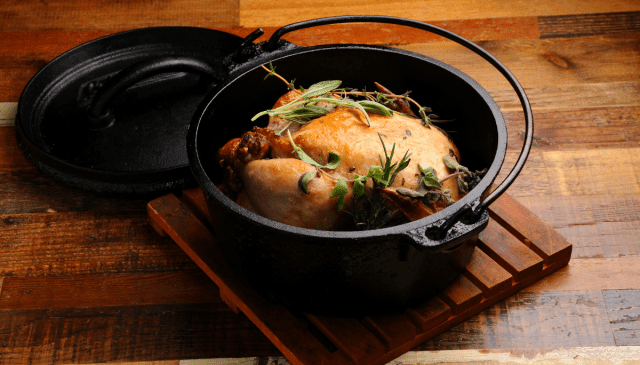 All over the world, large, deep-walled cast iron pots with tightly fitted lids are used to cook foods slowly over fires, on stovetops, or in ovens. These popular pots are known to South Africans as a “potjie,” to the French as a “cocotte,” and to Australians as a “bedourie.”

But this piece of cookware is perhaps most often referred to as a Dutch Oven. The creation of the dutch oven has a rich history that originated in the Netherlands but continued in England.

In this article, we’ll explore the origins of this popular piece of cookware. Keep reading to learn “Why is it called a Dutch Oven?” in more detail.

Why Is It Called A Dutch Oven – Its History and Origins

As perhaps expected, the Dutch Oven owes its origins to the Netherlands. However, its development, and its name, comes from an English industrialist known as Abraham Darby. He gave this pot its distinctive name as an homage to the Dutch.

Originally Dutch ovens were made of solid cast iron, while today, many newer Dutch ovens are made from ceramic or cast aluminum. You may have heard the term “enamelled cast iron” in reference to colorful Dutch Oven brands such as Le Creuset.

During the industrial revolution, people in North America and Europe were seeking ways to make products cheaper and faster – and this included cookware.

Abraham Darby was one of these industrious individuals who wanted to make more affordable pots and pans, and produce more of them, more quickly. It is said that Darby went to the Netherlands to do some spying with the aim of discovering how the Dutch made their brass pots.

The Dutch were known for their skill at making brass pots and pans using a sand mold to cast their cookware. This type of “casting,” or mold, created a very high sheen to the cookware, but the cost of brass was extremely expensive.

Darby took back what he had learned to the United Kingdom. His company, the Brass Works Company of Bristol, wanted to compete and become the best cookware production company in Britain. Darby, with the help of his colleagues, discovered the best way to produce a more economical pot by combining the Dutch method of using sand molds with cheaper cast iron.

Prior to this, manufacturers around the world were using sand, clay, or loam for casting pots. As mentioned, the Dutch had been using sand because it produced a much finer finish. Darby was focused on a good finish and spending less money and time producing it.

In the Netherlands, the Dutch oven is known as a braadpan, which translates to a roasting or frying pan. In the 1890s, a Dutch cookware manufacturer gave the English-designed Dutch oven a useful makeover by creating a more modern pot made with enameled steel.

By incorporating steel, this new Dutch oven was much lighter than its cast iron predecessor. The new steel Dutch ovens are suitable for both gas and electric stoves and are ideal for the more modern kitchens of today.

These heavy-lidded pots are now often enameled, and can either be used in the oven or on the stovetop to make stews, casserole dishes, or roasts. The Dutch often used these pots for frying meats.

Americans eventually began buying these pots and made their own changes to the English-style Dutch oven during the colonial era. The famous Patriot, Paul Revere, is known to have added legs to these pots, alongside designing a ridged flat lid for holding coals.

Settlers and colonists enjoyed using this cookware because of its durability and versatility. It is known that the famous, Lewis and Clark explorers, carried Dutch ovens with them on their expeditions throughout the American West. It was also one of the few items that they made sure that they took home with them after their expedition was completed.

In America, the Dutch Oven has a long following. It has a tradition of being used by families, miners, pioneers, and ranchers. It is a versatile pot that many people have relied upon. In 1896, Joseph Lodge built a cast-iron factory in Tennessee, for producing these pots. The Lodge Company to this day still produces its famous cast iron Dutch Ovens.

It may be called a Dutch oven, but it can be used as one of three things.

The Dutch Oven is commonly associated with fire. When the Dutch Oven was first used, it was often used as a pot and shield that was used on an open fire. It is a traditional cooking method that can be traced all the way back to the Ancient Greeks.

Hence, when the Dutch Oven was first introduced and used on an open flame, the pot was the oven itself.

Today, when thinking of the Dutch Oven, we mostly just see a pot because we put it in our ovens and on our stoves. However, back when it first emerged and was used on open fires, this product was both a pot and an oven. Once it was put on the open flame it could be used for frying, boiling, and cooking. This is what made it so versatile.

The name of this pot pays homage to the Dutch, as the origins of this pot’s construction comes from the Netherlands. Yet the name was given by an English Industrialist, who copied their cookware techniques. This pot has gained favor all over the world, and it is still used widely today.